Apologies for the delay in this week’s post – I had some major technical issues with my editing program but it’s all back on track now.

So with what feels like winter in Melbourne now, (actually, it’s still the last month of Autumn but it sure as hell doesn’t feel like it) I’m beginning to make full use of my electric blanket, velvety soft dressing gown and all the winter coats I purchased in Japan.

It seems like the perfect time to relive one of the coldest nights I’ve EVER experienced in my life. I believe we picked one of the chilliest nights to head to one of Japan’s most famous winter illuminations in Nabano No Sato. It was probably around 0 degrees celsius with super icy winds, therefore scarf, gloves and earmuffs were an absolutely necessary. Entry to the park was ¥2,000 a head, which seemed a little dear but it included a ¥1,000 voucher to use within the park. The voucher could be used on food or souvenirs so we put ours towards dinner at one of the many restaurants found in the park. The illuminations were spectacular – the photos don’t do it justice and despite the wind and the cold I thought it was well worth the journey.

One of the highlights of my night was an outdoor foot onsen inside the park where you could relax and soak your feet after wandering through the tunnel of lights. They had towels you could purchase for ¥100 to dry your feet or foot dryers (like hand dryers) to dry your feet for free.

8 million LED lights – only in Japan. 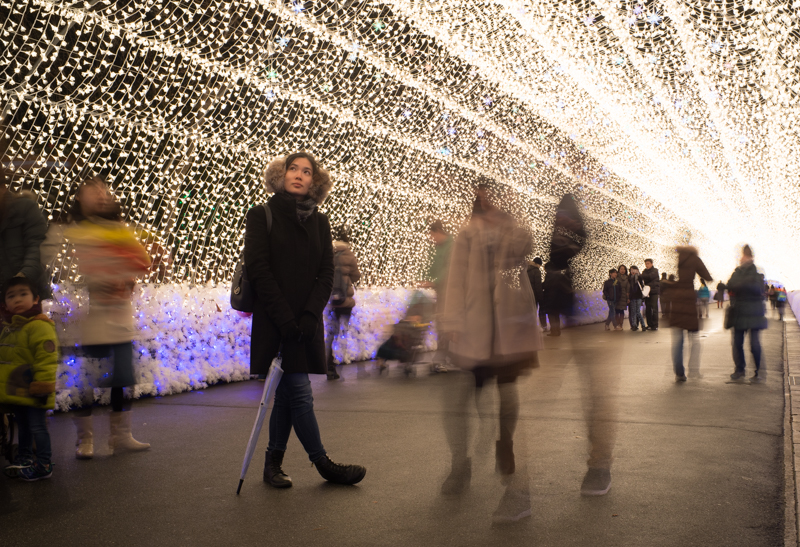